All these names and many others are derivatives of Amen they are spread over different cultures throughout Africa, Asia and Eastern Europe from ancient times until today. The names survives in Judaism, Christianity and Islam always referred to as "The faithful True Witness". People from all over the ancient world would learn and worship at the Temple of Amen in Ipet-Isut or Karnak until this day it is the largest Temple complex in the world. Because many scholars do not do comparative studies across Africa when studying the ancient world they miss or willfully ignore many parallels from the Dogon in West Africa who tell of their migration from Egypt and the worship of the One God named Amma to the Lands of Kush now present day Ethiopia the cradle of humanity and the origin of the name of Amen. Many people have been deceived or confused with associating Amen with Amen Ra, Re etc and not understand Ra, Re, Ras, Raj Rex, Roi is a title meaning Total or Great. The truth could not be concealed and what was hidden is now revealed.                                                          Ras Nahmir Amun 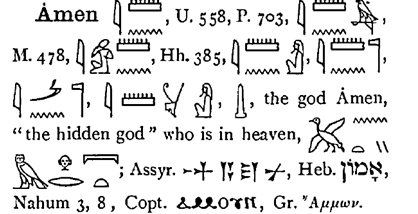 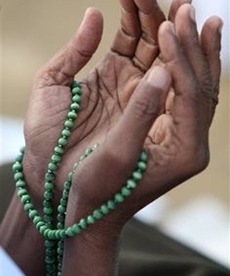 One in Harmony with Amen.

For there can be no faith more true or just than to know the things that are; and to acknowledge thanks for all things to the one that made them which thing I will not cease continually to do.

Maintain the Ten Virtues of Life

Give Dwira Ha (blessing and Praise) to Amen 3 times a day Morning, Noon and Night.

We know the soul or Ka  is divine energy and energy is never destroyed so death is a lie. But our deeds judge our soul. Our deeds are weighed against Truth and we are restored to the life that we have earned and will instruct us in piety toward Amen. To rise as Neter (Angel/Messenger) of Amen or fall to Devils is a choice of the person and their soul.

"And he that is material with wickedness as I said, received from the devils the seed of understanding; but they that are with the good essentially are saved with Amen"

Amen is the most  ancient name of the creator. It is the original belief in One God from the Nile Valley. It means faithful, true and hidden.The flesh on the outside is not the person rather what is on the inside is the true person the Ka or soul is the Hidden and Faithful Truth of Humanity. We are made in the image of our creator as Amen is the true Ka or Soul of the Universe we must know ourselves and know Amen is within us. Truth is our salvation.